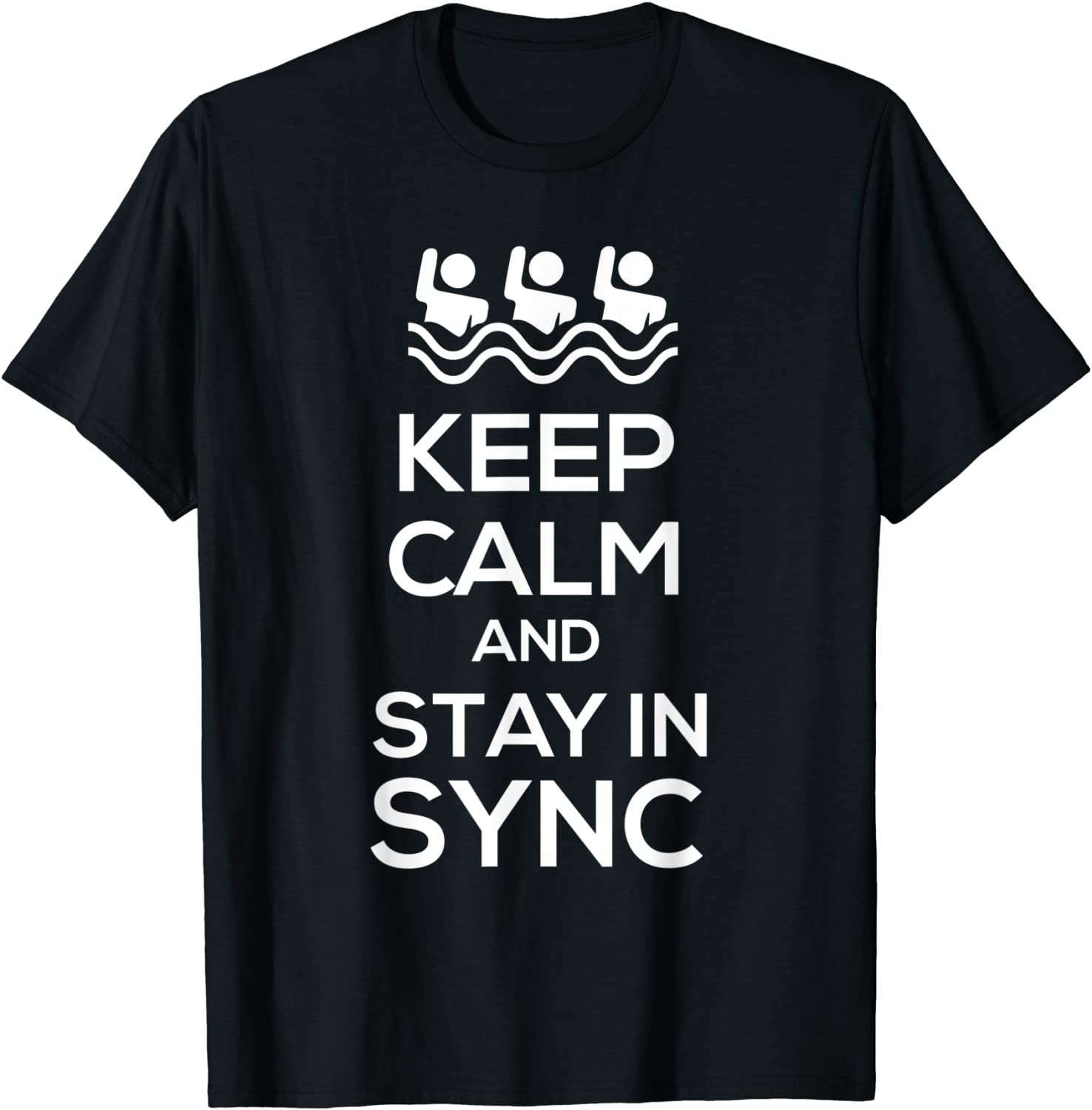 The most important thing to keep in mind while doing DDD (Domain Driven Design) is to focus on business domain problems, and model the domain so it reflect the ubiquitous language spoken by domain experts. It is true that we inherently should not worry about the persistence mechanism, because rightfully so, it is an implementation detail that the domain should not need to worry about.

Yet what is a software worth if it doesn’t … well “implement” things? I would say just as good as your white paper concept.

We basically have two options for persistence while doing DDD:

Going with the 1st approach we get benefits such as:

While the first two points aren’t really that big of a deal (Since it highly depends on the quality of the developers and the organizational culture). The 3rd one is definitely an important point, as it would be very counter-beneficial to do things like Updates on the database for all rows and columns regardless whether they have changed or not.

Enough of the pros, let’s look at the cons of using the 1st approach.

Although modern ORMs (EntityFramework, NHibranate etc) do give you quite a bit of control on how to map your models to the database. Unfortunately they do enforce you things like:

Another con of the 1st approach is the speed of releasing software versions. While it is somewhat true that v1.0 of the software is released faster (I have my doubts on this), your organization will see the impact when you come to v3.0 or v7.5 (arbitrary chosen).

But enough of sharing the domain model with persistence. Let’s look at the benefits with having separate domain & persistence models:

But why do so many people still go with the shared model approach?

As I have read all across the internet I found a common reason: Change Tracking.

Change tracking (CT) is the process of determining what has changed in managed entities since the last time they were synchronized with the database.

Mature ORMs like EntityFramework, NHibernate etc, come with this feature at hand and i have to say it is a wonderful feature to have (Though it adds overhead when loading entities, but more on this later). Since CT is such a highly wanted feature it is more than natural for developers to hesitate on separating DM from PM because you WILL loose this feature when you do so.

While browsing forums and sites like stack-exchange you see questions related to CT when separating DM from PM. And all the answers shift away the focus of the question.

“The persistence is a mere implementation detail” — Yes, but how to fix CT problem?


“This shows you’re looking at the problem backwards” — Yes, but how to fix CT problem?

I especially hate the CQRS answer as it isn’t an answer at all. With CQRS you get the benefit of using ViewModels/DTOs for reading data as you can do pure SQL queries against the database, and not worry about loading the whole aggregate into memory because you aren’t going to do changes to it. But the commands in CQRS still need to worry about the DM and loading & making changes to the aggregate, so you still have your CT problem in place.

People (rightfully so) just want an example of having a separate DM & PM while preserving the CT feature. That is the exact reason for this article.

Now let’s jump into the example… Shall we?

I have made a simple .NET Core console application where the DM is separate from the PM. 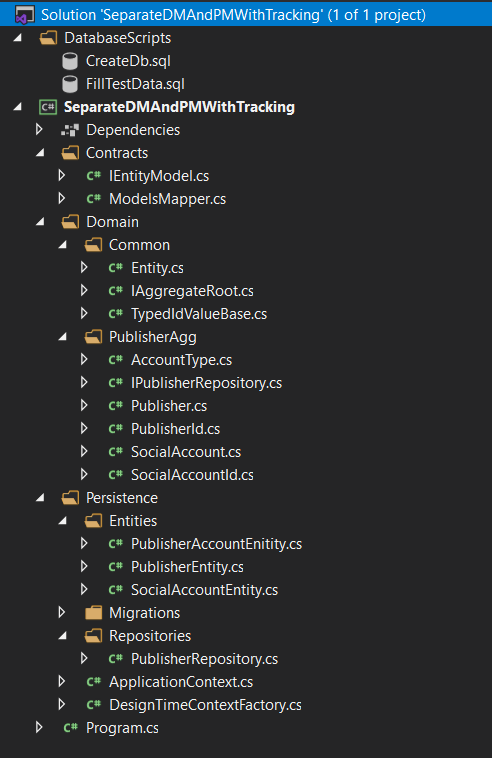 Let’s elaborate what each folder contains:

I found this a good example as it is a good candidate for a persistence model represented with a many-to-many relationship and a one-to-many denormalized domain model.

The Publisher class is the aggregate root so it handles the business invariant’s (fancy word for “rules”) for itself but the SocialAccount handles it’s invariant’s within itself.

Publisher contains it’s Id, Name and a list of SocialAccounts, and exposes method for the social account (ChangeAccountType, ChangeAccountEmail). Notice also how Publisher implements the IAggregateRoot interface (The repository can work with only objects that implement this interface). 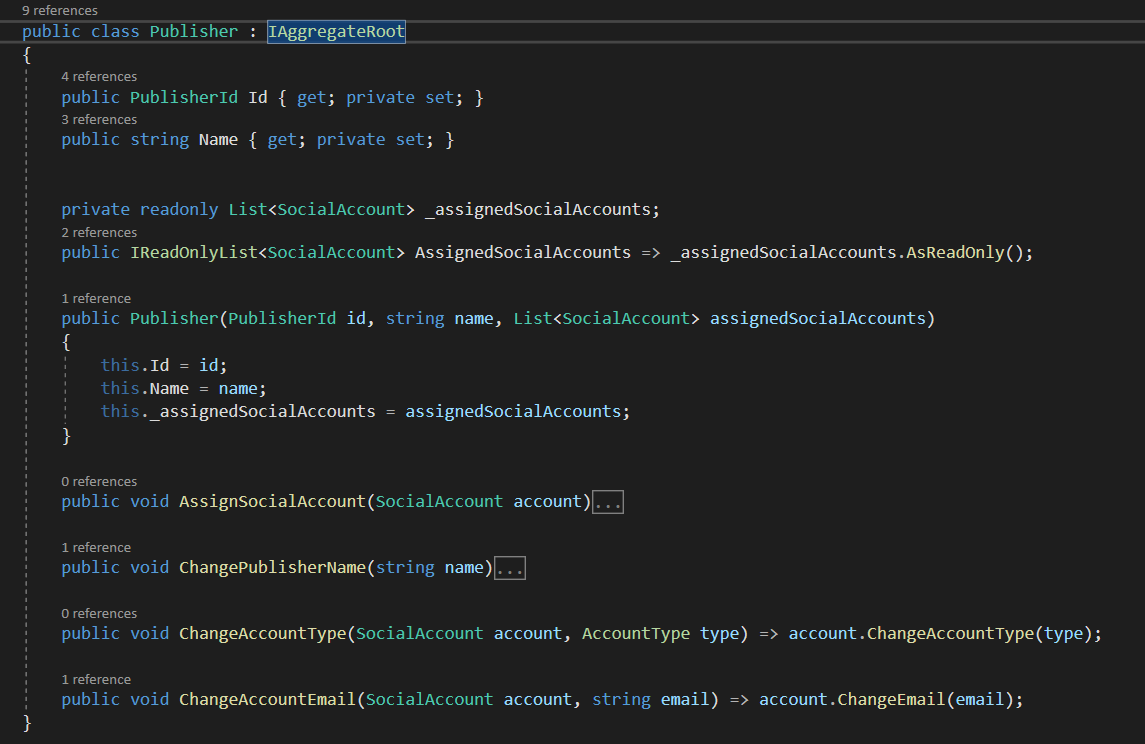 A closer look at the methods shows how the aggregate controls the business invariant’s. 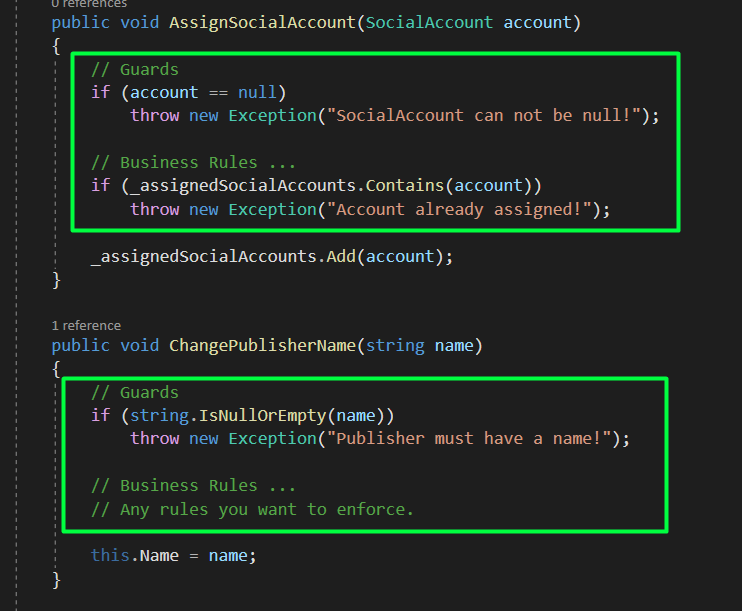 Having a look at the SocialAccount class, it contains it’s Id, Email, and AccountType (It has no reference to the Publisher). It also has methods like ChangeAccountType and ChangeEmail, which are internal and accessible only from the Publisher, yet it alone handles it’s invariant’s. 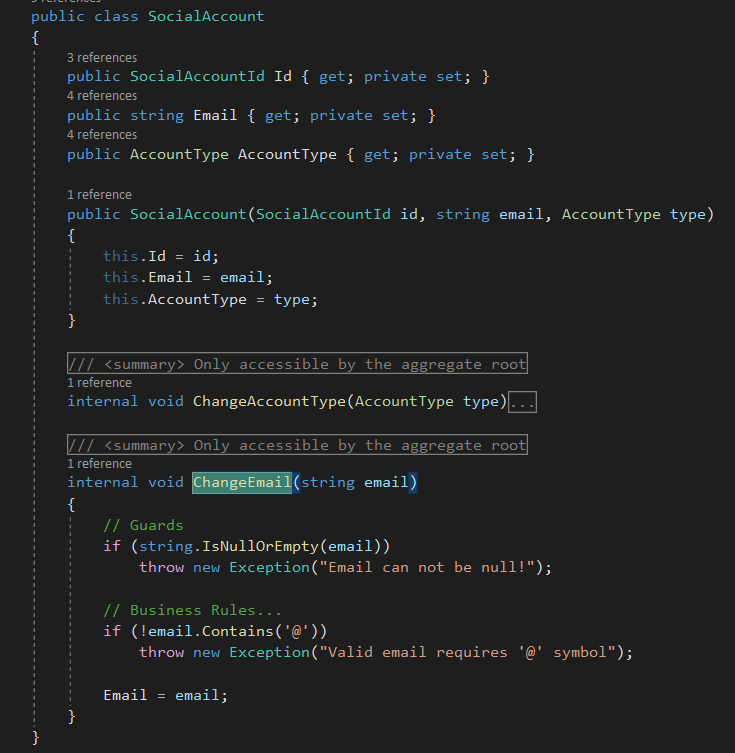 The persistence models are in the persistence folder, and here we need to introduce a new class called PublisherAccountEnitity which represents the many-to-many relationship, because the database needs it. But we are free to do that since this will not pollute our domain models anymore. 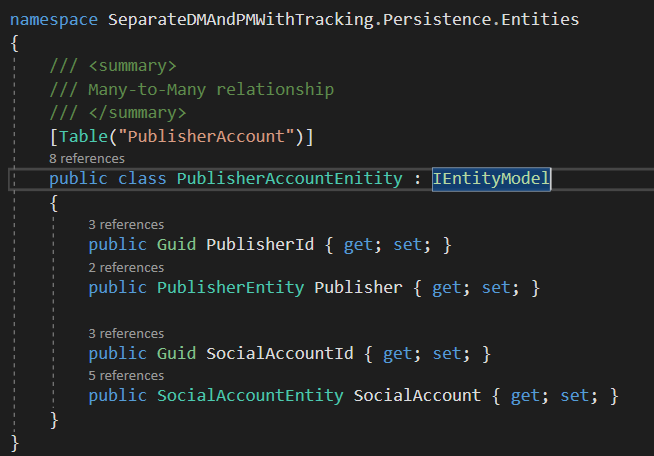 As we can see the ApplicationContext uses the persistence models rather than the domain models. 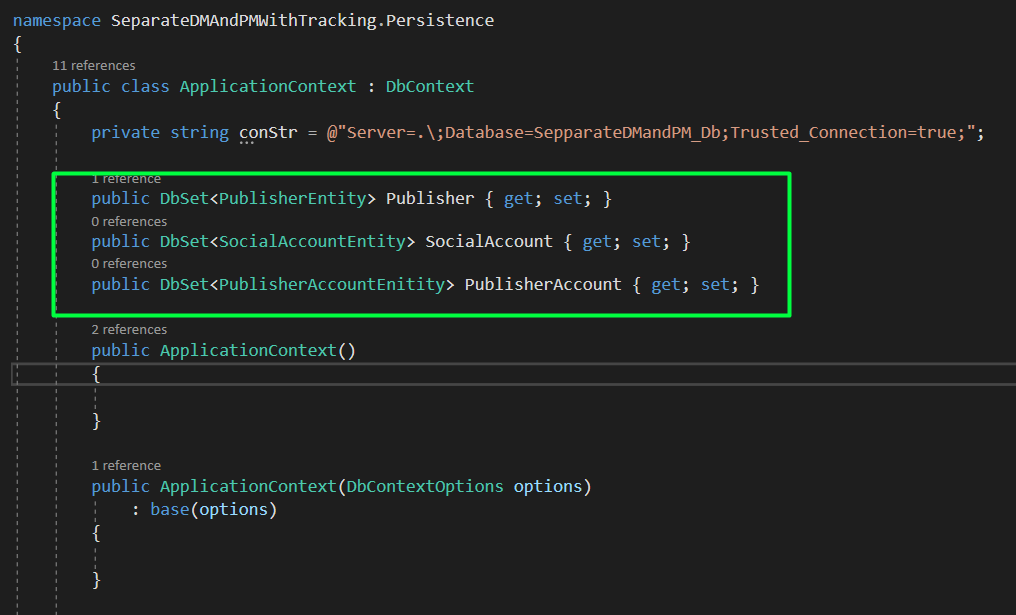 Idea behind the GetDomainResult is that in enterprise solutions you may not want to simply “Get” the domain model, but you might wrap it around a Result object and transfer error codes such as “not found”… You are free to override per liking as it is declared as virtual. 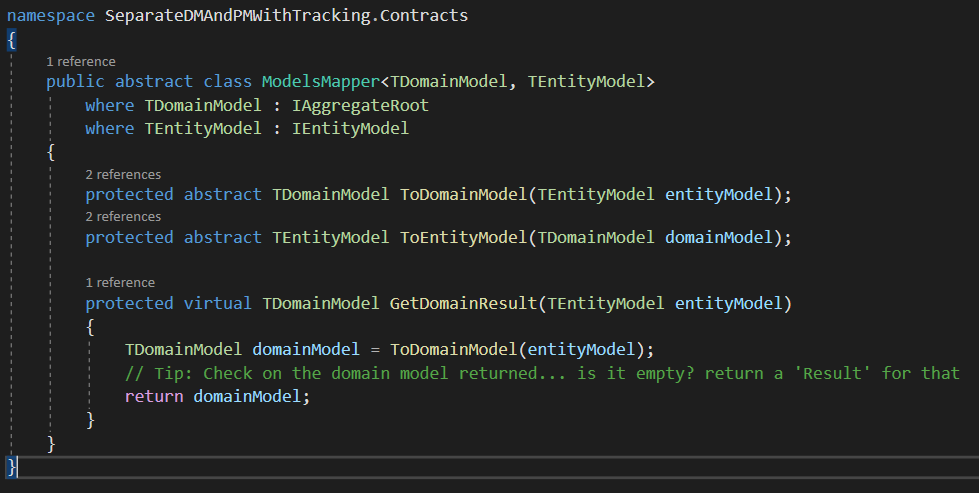 This is where the mapping & change tracking magic will happen 😉. 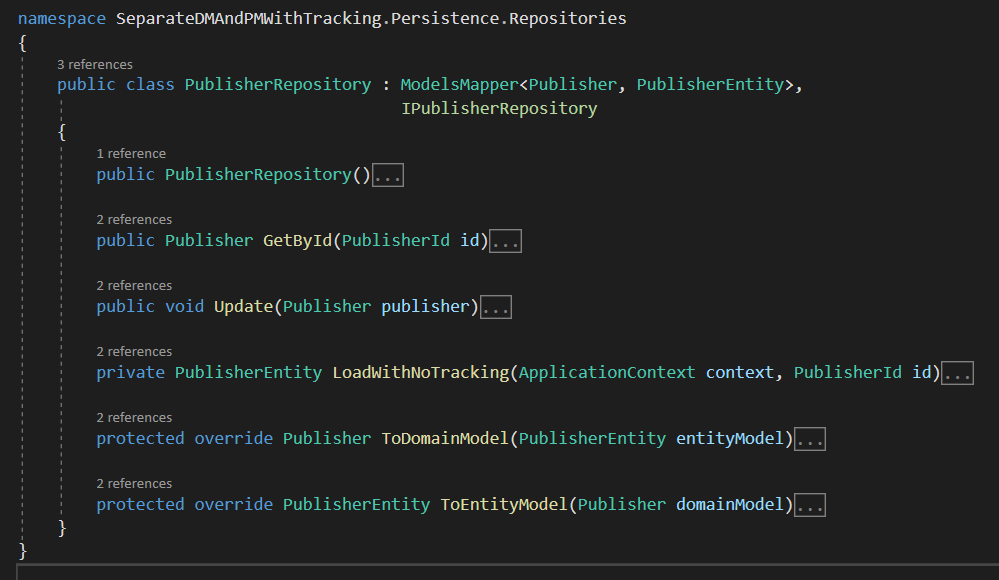 It also has a private method LoadWithNoTracking which is used internally to load the publisher’s data via EfCore, but with AsNoTracking used in the LINQ query expression.

The idea behind using AsNoTracking while loading the publisher’s data is that first of, it is faster, because EfCore doesn’t need to create a copy of the whole object-tree in memory. And also why would we want that? If at the end we will loose it anyway since a different instance of ApplicationContext will be used to load the publisher’s data and a different one will persist it. 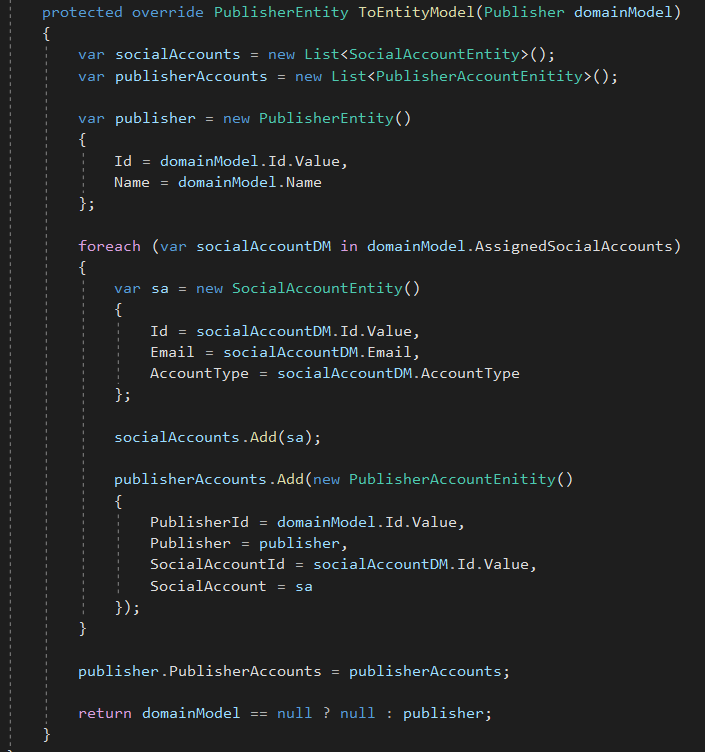 I know what you are thinking now… “Damn this is ugly!!!”. Yeah it is! Mainly because of the many-to-many relationship, but if you want to use a mapping tool like AutoMapper more power to you. I still prefer this way, because you have it in one place, you control it from here, as opposed to having mapping profiles and worrying about instantiating them at application startup. Also debugging is easier because it is coded explicitly as opposed to mapping tools which do the mapping implicitly.

A great tool I would recommend for such scenarios, where you want to have the mappings be explicit, but want to save some keystrokes is MappingGenerator by Cezary Piątek.

I don’t think mapping tools can help you out here, since you need to provide the necessary inputs of the aggregate root via it’s constructor to prevent an aggregate to go into an invalid state. But hey it’s again more debuggable😁.

I know, I know it’s been a long read but it was necessary to understand the whole problem (and solution 😉).

Jens Theisen has written a wonderful library called Reconciler. It is available for EF6 & EfCore. It is similar to GraphDiff but it also supports EfCore.

It is a set of extension methods for Entity Framework code-first approach, that allows you to save an entire detached model/entity, with child entities to the database, WITHOUT updating all the rows & columns, if they did not change.

We can see below the code in the Update method in the PublisherRepository. 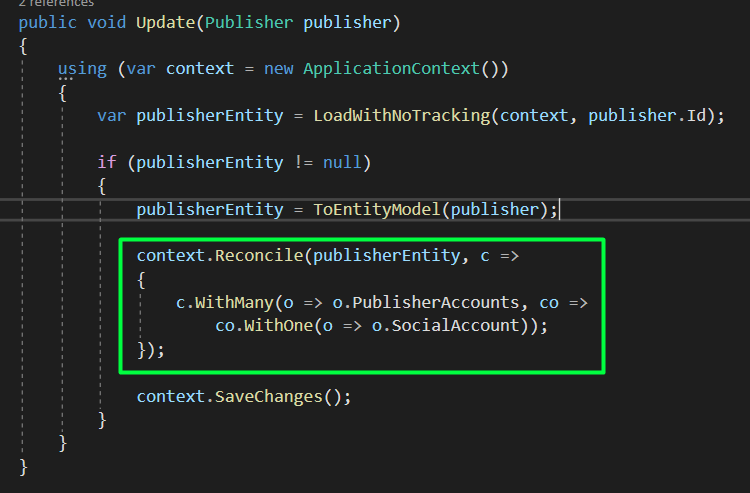 Let’s see it in action!

At this point we have created the database and run the script to populate it with test data.

Run the below T-SQL query in SSMS to get the result as show in the picture.

Result of the T-SQL query.

In Program.cs we do the following to test our simple application: 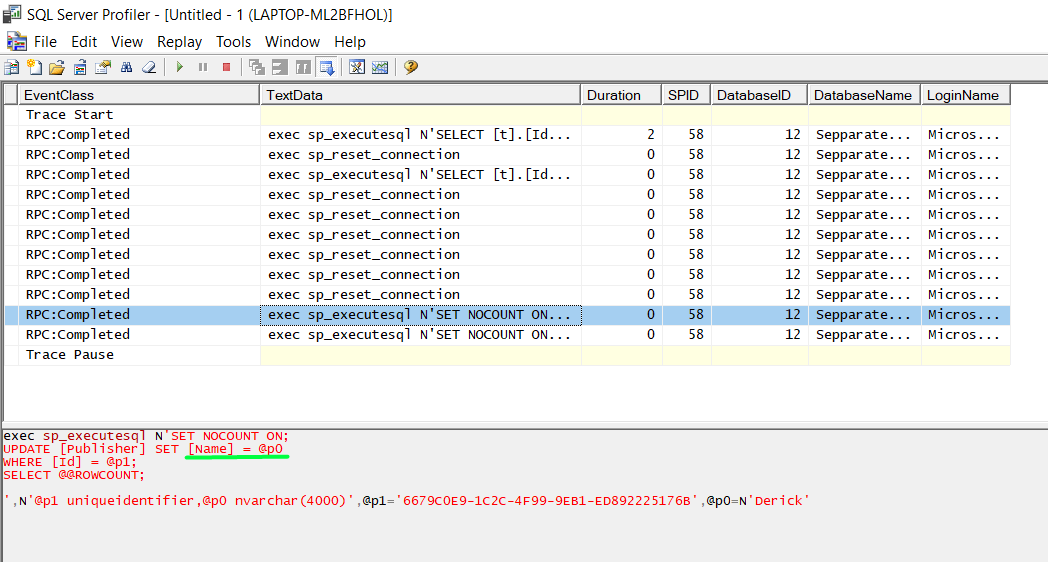 SQL Profiler — result of updating the name of the publisher.

Notice how only the [Name] column is being updated since that is what has really changed from the previous state of the publisher. 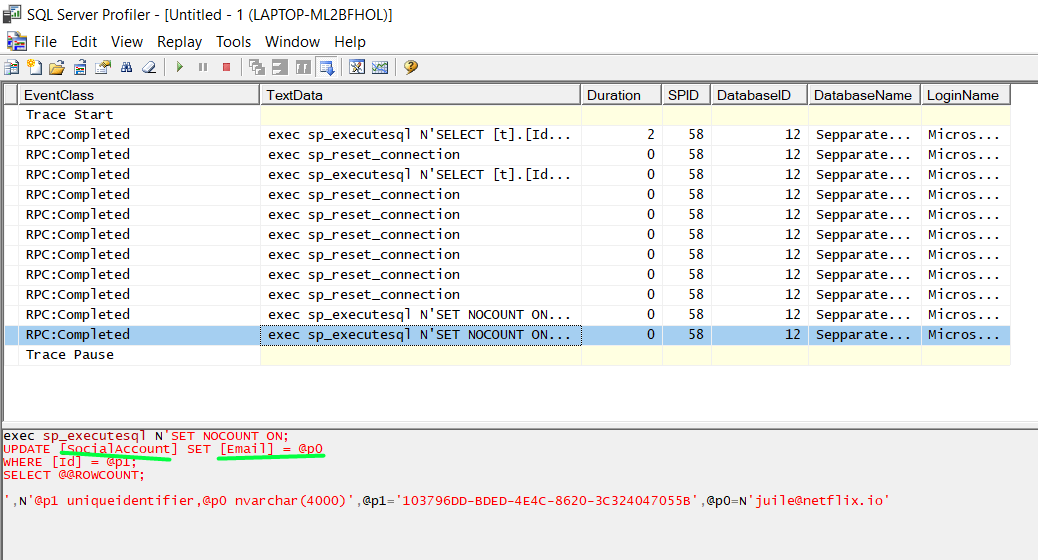 SQL Profiler — result of updating the email of the social account.

Notice how only the [Email] column is being updated since that is what has really changed from the previous state of the social account.

Notice also that the other social account with email “anthony@hotmail.com” is not part of the SQL query because we didn’t do any changes to that child entity of the publisher aggregate.

Tip: If we do update multiple child entities and want to use a “batch update” we can use EFCore.BulkExtensions to get maximum performance, while still having separate domain & persistence models🎉.

In this article I have elaborated the case of doing Updates but the same holds true for Inserts & Deletes. Simply use Reconciler’s DbContext extensions within your repositories Add, Update, Remove methods and you are good to go.

But seriously have a look at EFCore.BulkExtensions you can make your application much more performant by using Bulk methods for Inserting, Updating and Deleting multiple records as a single batch query.

I hope this article helps people which are struggling to go with the separate domain & persistence models, mainly because of implementation details like change tracking and such.

If you found this article helpful please give it a share in your favorite forums 😉.
The solution project is available on GitHub.